Back
The Hamar Bull Jumping Initiation Ceremony is a rite of passage for Hamar youths, it must be completed before a man is permitted to marry. To be successful the youth must jump over the castrated bulls two times in each direction. The bulls are held still, so the physical risk is limited. The jumping is performed naked as a symbol of the childhood the initiate is about to leave behind. After succeeding the young man becomes a Maza - an age set of men who have recently completed the same initiation ceremony. Several days of feasting follow.
Before the jumping takes place Hamar women from the youth's village, especially the jumper's sisters, provoke a Maza into whipping their bare backs with sticks, these inflict open wounds that scar them for life. The wounds are seen as the mark of a true Hamar woman. As the woman was whipped at the ceremony and endured pain for the initiate, she can ask him for help later in life if she falls on hard times, the scars from the whipping prove his debt to her.

The Hamar people, numbering around 45000, are semi-nomadic pastoralists. Their villages contain conical huts consisting of a dome frame of branches covered with grasses, mats and hides. The huts are built around a meeting place where dancing and feasting occurs, together with a cattle and goat pen they make the village. The Hamar often trade with their neighbours for sorghum and corn as they do not grow it themselves, while goats and cattle offer milk and meat. Sorghum is made into a pancake or porridge and eaten with a stew. Men typically wear a checkered skirt of cloth while women wear a cow skin skirt.

Click on any of the images below to view the an enlargement. 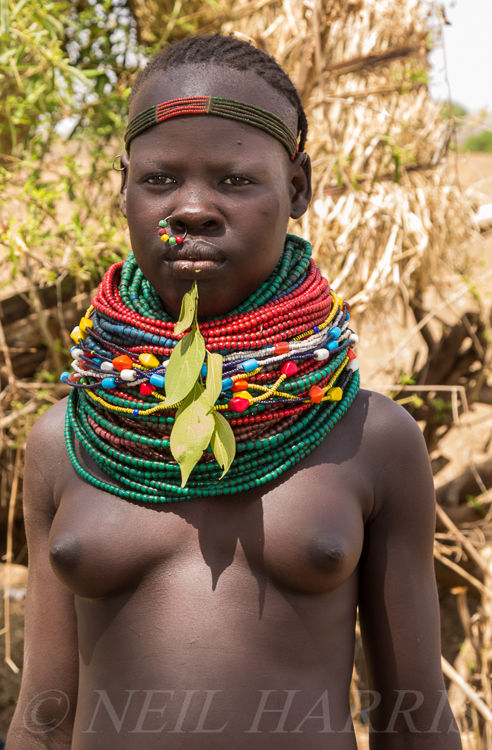